Transhumanism Puts the Finishing Touches on the Materialist Religion


There are many definitions of religion, and not all of them specify that religion must entail a belief in a deity. For example, a broad definition of a religion was given by the anthropologist Clifford Geertz. He defined a religion as " a system of symbols which acts to establish powerful, pervasive, and long-lasting moods and motivations in men by formulating conceptions of a general order of existence and clothing these conceptions with such an aura of factuality that the moods and motivations seem uniquely realistic."

Here is another rather similar definition: we can define a religion as a set of beliefs about the fundamental nature of reality and life, or a recommended way of living, typically stemming from the teachings of an authority, along with norms, taboos, ethics, rituals, roles or social organizations that may arise from such beliefs.

Such a definition covers every religion I have learned about, including Christianity, Islam, Buddhism, Hinduism, Confucianism, Taoism and Scientology. Interestingly, under such a definition, Darwinist materialism may also be defined as a religion.

Darwinist materialism does constitute a system of beliefs about the fundamental nature of reality and life, by teaching that all of the blessings of nature are accidents produced by blind natural processes, and that reality is fundamentally material rather than spiritual.  It also seems to teach a recommended path of life, by teaching or implying that activities that humans have so often engaged in (such as religious activities or spiritual activities or the study of the paranormal or the search for design in nature) are a waste of time, and by guiding people into a particular groove of speech, thought, and conduct that wins the approval of materialists.

Let's look at how many of these traits Darwinist materialism has.

The first item in the checklist is “Revered founder?” It is a hallmark of religions that the founder of the system of thought is treated as some kind of some special fountain of wisdom. A believer in a religion might dismiss some thought as shallow or dubious if he thinks that thought came from the mind of some ordinary person, but he may think that same thought is a pearl of wisdom if it came from the founder of his creed. Does Darwinist materialism have this “revered founder” characteristic? It would seem so, and the revered founder is Charles Darwin. An example of the fanboy zealotry of materialists towards Darwin was a statement on page 158 of the book The Inflamed Mind by Edward Bullmore, in which (referring in general in biological explanations) he states, "Ultimately, the answer must always be Darwin." 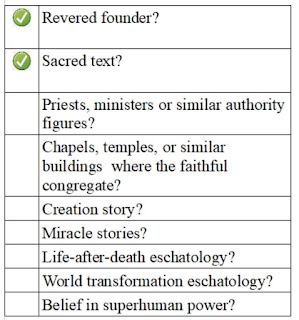 What about the third item on our checklist, “Priests, ministers or similar authority figures?” In a religion such as Catholicism there are priests who wear special garb, and in Protestantism there are ministers who serve a similar role as apostles of the belief system. Is there anything similar in Darwinian materialism? It would seem there is: the professors of evolutionary biology and similar professors such as professors of neuroscience.

Consider the activities of two young men, Rod and Bill. Rod decides to become a minister in a church. He is indoctrinated for years in a regimented minister-schooling environment in which allegiance to the belief system of his teachers is demanded. After graduating, he then spends lots of time standing before assemblies of other people (parishioners), preaching the teachings of his belief system. Using lots of specialized jargon, Rod may also spend a lot of time in scholarly writing to advance the beliefs of his church, contributing to things such as religion journals and theological books. If a heretic arises in his church to dispute the accepted teachings, Rod may act as a kind of "defender of the faith" by reasserting the claims of the ideological orthodoxy he was instructed in.

Bill, however, decides to become a professor of evolutionary biology. He is indoctrinated for years in a regimented professor-schooling environment in which allegiance to the belief system of his teachers is demanded. After getting his graduate degree or PhD, he then spends lots of time standing before assemblies of other people (university students), preaching the teachings of his belief system. Using lots of specialized jargon, Bill may also spend a lot of time in scholarly writing to advance the beliefs of his scholastic tribe, contributing to things such as journals and books. If a heretic arises to dispute the accepted teachings, such as someone suggesting there is purpose and design in living things, Bill may act as a kind of "defender of the faith" by reasserting the claims of the ideological orthodoxy he was instructed in.

Clearly there are so many similarities between Rod and Bill that we can say that professors of evolutionary biology act as a kind of priesthood of the Darwinian materialist belief system. We may also note that special-status groups such as the National Academy of Sciences (with about 2000 members) can be compared to the college of cardinals of the Catholic Church (with about 200 members). The “Department of Evolutionary Biology” buildings in universities and colleges function just like chapels for the Darwinian materialist system. Instead of having ritualized meetings at chapels or churches, believers in Darwinist materialism have ritualized meetings at places like university lecture halls and TED talks. We can therefore add two more checks to our checklist: 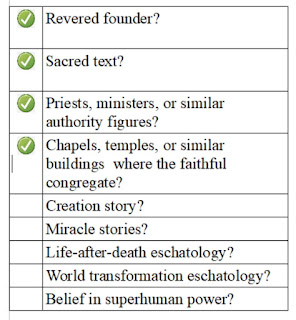 The next item on our checklist is “Creation story?” The creation story of organized religions are well known, such as the biblical story that God made the heavens and the earth (along with its life forms) in six days. Darwinist materialism offers its own creation stories, such as the idea that life began from a random combination of chemicals, and that all biological innovations arose from random mutation and what Darwinists call "natural selection" (although they don't believe this actually involves a selection in the form of a conscious choice). You might protest that these are scientific facts, not just creation stories. But neither of these claims is a scientific fact. There is zero evidence that life ever arose by a chance combination of chemicals, and no one has ever succeeded in  attempts to produce living things (or the protein molecules that are the building blocks of living things) from combinations of mere chemicals in a laboratory simulating the early earth. We have no proof that any single macroscopic biological innovation ever appeared because of random mutations, natural selection, or a combination of random mutations and natural selection. The creation narratives of Darwinian materialism can therefore be classified as creation stories rather than scientific facts, the term “creation story” not necessarily meaning something untruthful.

As for whether Darwinist materialism involves a belief in miracle stories, some would argue that the Darwinian origin accounts are just such things. It can be argued that to believe that random mutations and natural selection (essentially just survival of the fittest) can produce something as immensely complex as a vision system (or a very complex protein molecule with hundreds of amino acids arranged in just the right way to produce a complex functional capability) is to believe in a miracle of luck, something as miraculous as falling trees in a forest conveniently forming into a large log-cabin hotel. But the point is debatable, so for now let's just put a question mark on the “Miracle stories?” line of our checklist, updating it as follows: 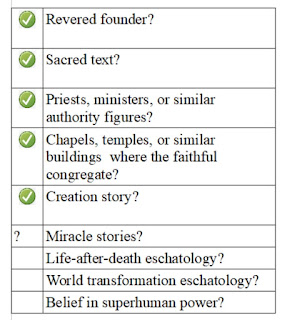 So we have an outcome in which Darwinist materialism is starting to resemble a religion, but at least the last three rows on our checklist are unchecked. However, in recent years we have seen a growth of what is called transhumanism. And it seems that the transhumanists are determined to propel Darwinist materialism into a system of thought in which the last three items on this list are checked off.

The transhumanist offers a strange version of a kind of a life-after-death eschatology. Transhumanists tell us that at some point in the future, people will be able to upload their minds into a computer or a robot. Transhumanists refer to such a thing as a “digital afterlife.”

Just as some Christians tell us that the planet will soon be transformed by the Second Coming of Jesus or some rapture in which the faithful ascend into heaven, the transhumanists tell us that the world will soon be utterly transformed after a “superintelligence explosion” results in the creation of superhuman electronic minds far superior to human minds (and after humans upgrade themselves into genetically or electronically enhanced supermen).  This is a kind of world transformation eschatology, as the creation of such super-minds would presumably lead to a transfiguration of global reality as dramatic as we might expect under the Second Coming of Jesus.

Although the transhumanist does not tend to believe in any divine authority, he may well believe in superhuman extraterrestrials with god-like powers. Also, the  transhumanist believes that there will soon be a superhuman power on Earth, once there appears superintelligent computers or robots far smarter than men (as well as genetically or electronically upgraded humans who will be superhuman powers). Of course, all of these tales of future wonders such as mind uploading, digital afterlives and the appearance of supermen and superintelligent robots are very much a new type of miracle story. So when we add these miracle stories to the other tales of random mutation miracles of luck and the tale of a miracle of luck in which incredibly organized life first forms from mere unorganized chemicals, we have a system of belief in which there seems to be multiple miracle stories.  So in the case of transhumanist Darwinist materialism, the checklist now looks like this: 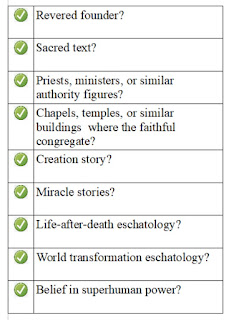 Having written a rather long blog post already, I will not now get into the weighty question of whether transhumanist materialism is a believable religion. I will merely note that a discussion of various considerations relevant to such a question can be found in the past and future posts of this blog.
Posted by Mark Mahin at 9:03 AM