One Day's Dubious Stories at a Science News Web Site

Major websites make money from online ads. So the more people click on a link to some science story, the more money the website makes. Nowadays science news sites have a tremendous financial incentive to hype and exaggerate science stories. If they have a link saying, “Borderline results from new neuron study,” they may make only five dollars from that story. But if they have a story saying, “Astonishing breakthrough unveils the brain secret of memory,” they may make five hundred dollars from that story. With such a situation, it is no wonder that the hyping and exaggeration of scientific research is at epidemic levels.

Part of the problem is university press offices, which nowadays are shameless in exaggerating the importance of research done at their university. They know the more some scientific research is hyped, the more glory and attendees will flow to their university.

A scientific paper reached the following conclusions, indicating a huge hype and exaggeration crisis both among the authors of scientific papers and the media that reports on such papers:

We can get a good idea of how bad the science hype problem has become by looking at misleading or dubious news articles available on a single day at a major science news site, www.sciencedaily.com. The day I found these articles was June 22, 2019. ScienceDaily.com is a site that gets revenue from ads. On this day I found three ads on the front page of the site, two peddling a car lease, and the other peddling a Samsung smartphone. The more sensational and enticing the claims made on ScienceDaily.com, the more money the site will make from people clicking on its ads.

Another of the doubtful stories on ScienceDaily.com on June 22 had this headline: “Origin of life: A prebiotic route to DNA.” Prebiotic means “before life existed.” The concept of DNA existing before life existed is nonsensical, and the news story does nothing to substantiate such an idea. The story merely talks about a hypothetical pathway by which some of the chemical sub-units of DNA may have arisen, some chemical sub-units called nucleosides. Nucleosides are to DNA like individual characters (A, B, and so forth) are to a book. So the Science News article should have been entitled “A prebiotic route to DNA building blocks,” not “A prebiotic route to DNA.”

The study authors played around with three different arbitrarily contrived "neural score" calculation algorithms. The first two algorithms (consisting of 4 or 5 steps) failed to show any evidence that brains reflect a subject's knowledge, as we see from the line I just quoted.  The third algorithm was an extremely complicated and arbitrary 7-step algorithm, including various selections  and assignments in which scientists were free to choose whatever they wanted, and quite a lot of complex statistical manipulation and transformation.  This extremely convoluted algorithm produced a "statistically significant" difference between two study groups with different knowledge levels -- something that could easily have occurred purely because of chance data variations.  This smells like a case of "keep torturing the data until it confesses."  The authors give no justification for why we should accept this convoluted algorithm as a valid way of computing a "neural score" related to knowledge, rather than a million other possible ways someone could compute such a score.

This creates quite a problem for Darwinian theory, as it is not what such a theory predicts. According to Darwinian ideas, what we should have seen is more and more phyla appearing as time progressed, as more and more branches appeared in a tree of life, like the tree of life that appeared as an illustration in The Origin of Species. In fact, Darwin said in The Origin of Species that the Cambrian Explosion “may be truly urged as a valid argument against the views here entertained.”

The June 22nd science news story about plate tectonics and the Cambrian Explosion suggests a laughable idea: that geological activity produced lots of oxygen, and that this oxygen caused the enormous burst of biological origins that was the Cambrian Explosion.  We should chuckle at this puerile idea, and ask those who propose it: is that all you got?

You don't explain something by merely mentioning a necessary condition for it. For example, if you were puzzled by  extraterrestrial monsters suddenly appearing in the international space station, you wouldn't explain their appearance by saying that the oxygen in the space station was necessary for their existence.  So it is nonsensical to have a headline suggesting that some oxygen-producing geological event was the cause of a huge information explosion involving a vast burst of biological innovation that produced almost all animal phyla.

The news story in question also made a claim about oxygen very inconsistent with a science news story earlier this year in which we read the following:


A study by University of California, Berkeley geochemists presents new evidence that high levels of oxygen were not critical to the origin of animals. The researchers found that the transition to a world with an oxygenated deep ocean occurred between 540 and 420 million years ago.
The Cambrian Explosion is dated at about 540 million years ago.
Another of the very dubious stories on the June 22 “Science Daily” site had the title “Ultimate destiny: How undifferentiated cells commit to their biological fate.” The news article repeatedly tried to persuade us that cells make decisions. Here are some excerpts:

The human body is made up of hundreds of cell types exquisitely specialized to perform their jobs with great precision. This complexity, however, belies the fact that each of the trillions of highly specialized cells start out as a single primordial cell. How do these primitive, undifferentiated cells choose their ultimate destiny?...The findings....show that cells face multiple competing choices on their journey to adulthood and perform a series of binary decisions until they reach a final destination....The research reveals that neural crest cells' decisions occur in three phases: activation of competing genetic programs vying for the cell's attention, gradual biasing toward one of these programs and the cell's ultimate commitment...To retrace the decision making of these primitive cells as they diverge into different areas of specialization, the investigators used single-cell sequencing...As cells decide on a path, one genetic program becomes stronger, while the competing one gets weaker, allowing the cell to move toward its chosen path. The analysis shows that cells face a series of binary choices, with each subsequent decision further narrowing the choice of specialization.

Of course, this is mostly bunk and baloney. A cell never makes a decision, contrary to the frequent assertions of this news story. Only conscious agents make decisions. Also, there are no genetic programs offering different specialization paths for cells. Neither genes nor DNA specifies the structure of any cell. DNA does not even fully specify any of the proteins that are the building blocks of cells. DNA merely specifies the low-level polypeptide sequence (amino acid sequence) that is the starting point of a protein molecule, before protein folding occurs for unknown reasons.

So how is it that generic cells become different types of specialized cells? That's a great mystery that we don't understand. We don't even understand what causes cells to divide. We should not pretend that we know something we do not, by inventing mythological narratives about cells engaging in decision making and deliberation.  It is reasonable to suspect that the mysterious workings of cells (so inexplicable from a bottom-up perspective) are the result of some unfathomable top-down influence, but we have no understanding of how such an influence could work. 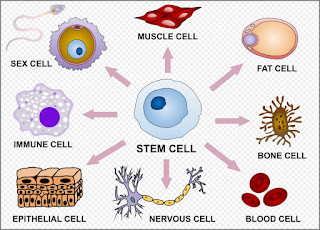 Cell differentiation is simply one of a host of mysteries scientists do not understand. See here for 50 other such mysteries.

There was so much error and doubtful hype on the Science Daily web site on June 22, 2019, with five dubious or misleading headlines or stories. This type of thing is partially the blame of university press offices, and partially the blame of headline writers who sometimes "sex up" science news stories that may have already been "sexed up" by a university press office.

Similar problems occur at the Daily Galaxy site (www.dailygalaxy.com), which sometimes has misleading headlines with made-up quotes not matching the words of any person in the article under the headline. An example on June 26 was their story, "Non-Biological Origin of Life –'Ancient Proteins Embedded in Meteorites.' ” The story presented no evidence whatsoever that proteins have been discovered in meteorites, nor did it quote anyone who thinks that any meteorite ever had a protein. The story merely discussed chemical fragments a thousand times simpler than a protein.

At least on www.sciencedaily.com the ads are clearly marked as ads (although in a grayish-white "Advertisement" announcement that is just barely visible). But on the very widely read www.reddit.com "subreddits" such as www.reddit.com/r/science,  we have ads that are blended in with the science news headlines.  Unless you are aware that the word "promoted" refers to an ad,  you are likely to be completely confused about which headlines are news stories and which headlines are ads. How can we regard any site following such a presentation policy as a trustworthy source of information?

Postscript: The sciencedaily.com story here is an example of an extremely misleading story on that site.  The story had the title "Sound waves boost older adults' memory, deep sleep" and the subtitle "Pink noise synced to brain waves deepens sleep and triples memory scores in older adults." Such a thing would be a huge breakthrough if it were, but it isn't true at all.  The actual results are shown in Table 2 of the study.  The 13 subjects given the sound waves and the "pink noise synced to brain waves" recalled 52.1 percent of the words, and the subjects given a "sham" treatment without such waves recalled 47.8 percent of the words. Instead of doing 300% better with the sound waves, the subjects did only 8% better, a result that could easily have been due to pure chance with so few subjects tested.
Posted by Mark Mahin at 8:20 AM 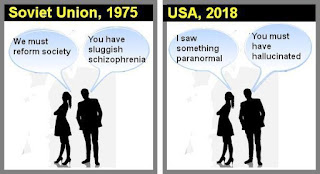