Closed Minds of a Professorial Priesthood

It is very widely acknowledged that one of the traits of a good scientist is open-mindedness. Open-mindedness can be described as the ability to concede that your idea about how something works may be wrong, and a tendency to objectively weigh any evidence that comes up suggesting that the thing may have an explanation or characteristics very different from what you normally think. Almost all of today's scientists would describe themselves as having the virtue of open-mindedness. But the truth is that a large fraction of them are not very open-minded at all. The problem is that scientists are created by university belief enclaves that are breeding grounds for closed-mindedness.

An unwritten rule of many an exclusive social group is what we call the principle of “make it hard to enter the group.” If you make it so that a person must spend hard years to enter some group, you will maximize the chance that people entering that group will conform to its norms once they go to all the trouble of getting into the group. I once saw a fascinating documentary that showed how this “make it hard to enter the group” principle was used by a motorcycle gang. The gang had the rule that to enter as a new member of their motorcycle gang, you first had to spend years doing lowly favors for the gang members, such as fetching them drinks and food. This way the gang made sure that the only people who got into the gang were those willing to pay a high price in effort to enter it; and such people would be very likely to conform to the group's norms once they had gone to such trouble to get into the group.

Seminaries and graduate programs also make use of this “make it hard to enter the group” principle. In fact, a scientist graduate school seems to use such a principle to a much greater degree than a seminary. A typical seminary student doesn't have to pay for his education, but a person studying for a PhD typically has to invest a huge amount in tuition and other university fees, which could easily be $100,000 or more. Just as it is very unlikely someone will spend four hard years of time in seminary education to become a Catholic priest and then defy the belief system of that priesthood, it is very unlikely someone will invest four to eight years of time (and $100,000 or more in tuition and fees) to become a PhD, and then defy the belief norms of the scientist group he has worked so hard to get into. The person who emerges with a PhD from such long years of indoctrination may be no more likely to be open-minded about topics such as human origins, the mind-brain relation and paranormal phenomena than a newly minted Catholic priest will be likely to be open-minded on theological topics. 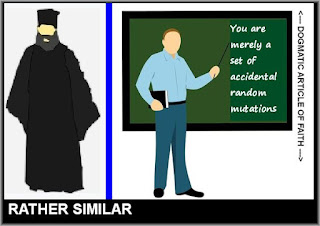 A good system of scientist education is one that would train scientists to be very humble, and to recognize that their knowledge of nature is merely fragmentary. Our system of scientist education is one that leads scientists to think they are great lords of explanation who pretty much have things figured out. And so we have a neuroscientist like Kandel ending a recent book with a chapter claiming that consciousness is the “last great mystery” of the brain, thereby overestimating his knowledge of the mind and brain by many times, and failing to recognize the countless mysteries on this topic scientists have not solved. Pretentious conceit about your level of knowledge about nature cannot co-exist with open-mindedness.

Very closed-minded scientists sometimes hypocritically lecture us on the virtue of open-mindedness. An example of this is a post on the Real Clear Science site entitled “What It Really Means to Be Open-Minded.” In that post we hear a quote from neuroscientist Steven Novella telling us it is important for scientists to be open-minded. He states the following:

"Scientists, critical thinkers, and skeptics can and should be completely open-minded, which means being open to the evidence and logic whatever it says. If the evidence supports a view, then we will accept that view in proportion to the evidence."

Such a statement of principles is very amusing coming from Novella, who over the years in his blog posts has shown himself to be an extremely closed-minded thinker who automatically rejects any evidence that seems to clash with the tenets of neuroscience orthodoxy, as reflexively as a man may jerk his knee after it is struck with a wooden hammer. An example of Novella's inappropriate closed-minded thinking is a statement he made in a blog post last year:

"Psi or anomalous cognition, is a group of alleged phenomena that include sensing what other people are thinking, viewing remote locations not accessible to the normal senses, and predicting the future in some way. These claims are inherently implausible because there is no way to account for them with known phenomena. They appear, therefore, to violate well-established laws of physics. Therefore, any reasonable scientists would argue, the threshold of evidence needed before concluding that a psi phenomenon is real should be very high. What we have is very low-grade evidence at best, therefore it is reasonable to reject claims for psi."

This is closed-minded obstinacy. The claim that the evidence for psi is “very low-grade evidence at best” is a simple falsehood. Extremely convincing laboratory experiments showing the reality of things like ESP have been done for more than a century. An example is the experiment done by professor Riess in which a person at a remote location was tested, and scored more than 70% on 1850 trials, in a test in which the expected result by chance was only 20%. The chance probability of this has been estimated  as 1 in 10 to the 700th power. The reason why the overwhelming scientific evidence for ESP has not been sufficiently accepted by scientists is that people like Novella keep telling us falsehoods by saying things such as the evidence for psi is “very low-grade evidence at best.”

As for Novella's reasoning about possibility and the laws of physics, they contain two glaring errors. The first is his statement, “These claims are inherently implausible because there is no way to account for them with known phenomena.” You do not show the unlikelihood of something by the fact that there is no way to account for it with known phenomena. It happens quite frequently in the course of science history that scientists make novel observations that cannot be accounted for by the explanations known at that time, leading scientists to come up with new ideas about causes. An example is how observations of stellar rotation rates around the galactic center led scientists to postulate dark matter, and the example of how meteorite falls led scientists to postulate the existence of asteroids.

Creating a pretentious priesthood through its academic ivory towers resembling seminaries, our science education system has trained scientists to be completely closed-minded about a wide variety of things. But closed-minded scientists often fancy themselves to be open-minded. There is one good way to test whether or not a scientist is truly open-minded on a topic: look to see whether the scientist shows signs of having very carefully studied the best evidence for some idea that conflicts with the dogmatic claims made by the scientist group that scientist belongs to. If you find evidence of such erudition, it does not prove that the scientist is open-minded on the topic, but may gave you a reason to suspect that he or she is. Almost all scientists who make statements about paranormal phenomena show no signs of having spent much time studying the evidence for such phenomena.

A person may be intimidated by the thundering sounds of scientists telling us, "This is our consensus," or "We say this is impossible," as intimidated as Dorothy was when she first saw the scowling floating head of the Wizard of Oz.  But when we understand the sociological and ideological factors which often are the stilts which support such opinions, and that the pronouncements of scientists are often merely the articles of faith of a belief community, then there may occur a certain "Toto pulling back the Wizard's curtain" moment in which intimidation is reduced.
Posted by Mark Mahin at 8:48 AM

Email ThisBlogThis!Share to TwitterShare to FacebookShare to Pinterest
Labels: ESP, sociology of science