One of the big problems in the culture of modern science is that web sites very often give us hype-filled stories that do not accurately state the findings of new scientific research. The problem is not at all limited to popular web sites. A large part of the problem is university press offices, which nowadays are shameless in exaggerating the importance of research done at their university. The authors of such press releases know the more some scientific research done at their institution is hyped, the more glory and attendees will flow to their university.

A scientific paper reached the following conclusions, indicating a huge hype and exaggeration crisis both among the authors of scientific papers and the media that reports on such papers:

At this link you can find analysis of recent misleading press releases on health research, many of them issued by major organizations such as universities and hospitals. Here are some of the article titles from the past several months, each corresponding to a faulty scientific press release:


But in none of these cases do we have a press release as faulty as a particular press release issued by Johns Hopkins University, a press release that very much misled the reader about an important scientific study. The study was one led by Richard Huganir to look for long-lived proteins in synapses. There is a reason why such a study was of considerable philosophical interest.

The most popular scientific doctrine concerning how memory is stored is the doctrine that memory is stored by a process of the strengthening of synapses of brains. But what we know about the lifetimes of proteins in synapses contradicts this doctrine. Humans can remember old memories for as long as 50 years. But as far as we know, the proteins in synapses have average lifetimes no longer than a few weeks. How could memories be stored in synapses that have their parts being constantly replaced? That would be like storing an essay written on leaves on a table, when the wind is frequently blowing away the leaves, and replacing them with other falling leaves -- not something suitable for long-term information storage.

The Huganir study was one specifically looking for long-lived proteins in synapses. If lots of long-lived proteins could be found in synapses, with lifetimes of many years, then it might be that the main theory of a brain storage of memories (the synapse memory doctrine) is not so unbelievable as it once seemed. But if few or no brain proteins were found with very long lifetimes, it would bolster the case that brains are not up to the job of storing human memories that can last for 50 years.

Now, judging from the press release about this study that was released by Johns Hopkins University, you would think that the study was a great success. The press release was entitled “In Mice, Long-Lasting Brain Proteins Offer Clues to How Memories Last a Lifetime.” Talking about two proteins in the body that last for years (crystallin in eyes and collagen in connective tissue), the press release states the following, ending with a quote from Richard Huganir, the leader of the study:

His team also knew of long-lasting proteins such as crystallin, which makes up the lens of the eye, and collagen, found in connective tissue. Proteins within nuclear pores, the transport tunnels in and out of a cell’s nucleus, and histones, a kind of “spool” that DNA winds around, also are very stable. “So, we reasoned, there must be proteins in those synapses that are long-lasting, too, and we believe we have found a lot of them.”

The problem is that this statement does not at all match what is in the actual scientific paper, which found no such thing. Quite to the contrary, the paper found the following:

Below is a graph from the Huganir paper. It shows that the study found that virtually all proteins in synapses are very short-lived. 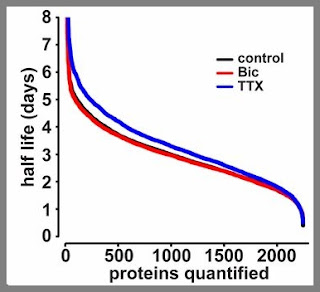 Below is another graph from the same paper. It shows that the study found that virtually all proteins in synapses are very short-lived. 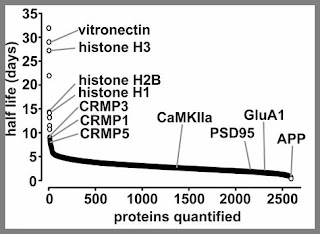 Given these results, it is extremely misleading for Huganir to be saying in the press release that he found “a lot” of “long-lasting” proteins in synapses. He found no such thing, and did not even find a single protein with an average lifetime of years.

So far from offering “clues to how memories last a lifetime,” as the misleading Johns Hopkins press release states, this study gives us all the more reason for thinking that memories would not even last a year if they were stored in our synapses as our neuroscientists maintain. An accurate title for the press release would have been “Study Indicates Synapses Cannot Store Memories for Longer Than a Month.” 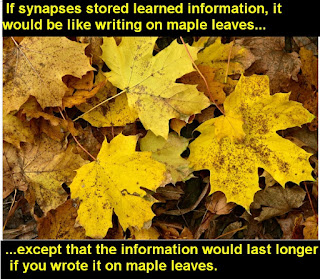 
The Johns Hopkins press release misleadingly suggested that there were some proteins in synapses that could account for memories that lasted for decades, something completely contrary to the actual data in the paper it was discussing, and also entirely contrary to the data in the other paper I have cited above. This reminds us of a type of bogus language use that has been going on among neuroscientists for decades.  For decades neuroscientists have been trying to suggest that an effect misleadingly called long-term potentiation might account for human memory. But the term long-term potentiation is a great misnomer. The effect is actually a short-term effect that almost always disappears within a few weeks, and has never been observed to last for years. Neuroscientists have known from the time of its discovery that so-called long-term potentiation is really a very short-lived effect. So why do they keep using this deceptive term “long-term potentiation”?

In this case of the Hopkins press release, personnel at a university are to blame for bad science reporting. That is very often how it is. An article entitled, “How Scientists Contribute to Bad Science Reporting” refers to a study that found that about one third of science press releases contain exaggerated causal claims. The article states the following:

Who should we blame for all this exaggeration and misinformation coming from college and university press offices? You might want to blame it on lowly press office staff members, but remember that any careful scientist will review the press release describing any study he led.
Posted by Mark Mahin at 9:57 AM