Some biologists keep perpetuating simplistic ideas about DNA and the brain, but sometimes the facts biologists discover seem to conflict with such ideas. One idea often advanced is that our DNA is some kind of blueprint for the body. Nature never told us such a thing, but it has been a convenient assumption for many. However, when we look at the size of the genomes in DNA, we find that some organisms much simpler than humans have genomes much bigger than we do.

If you do a Google image search for “genome size by base pairs,” you will see a variety of graphs like the one below. If we judge genome size by the number of nucleotide base pairs, we find that certain type of amphibians such as newts have a much larger genome than human beings. According to the graph below, from one of the fine science textbooks of Garland Science, the humble lily plant has a genome more than 10 times bigger than a human's, as does an amoeba. 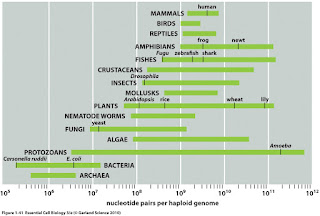 According to this link, a particular flowering plant has a genome 50 times bigger than the human genome.

Another paradox involves the size of the human brain. If asked to guess about the matter, most people would guess that the brain of a modern human is bigger than the brain of a person living in the Stone Age. But it seems that the opposite is true. A science article in the mainstream Discover magazine tells us this: “Over the past 20,000 years, the average volume of the human male brain has decreased from 1,500 cubic centimeters to 1,350 cc, losing a chunk the size of a tennis ball.”

The same article states the following:

Only a tight-knit circle of paleontologists seem to be in on the secret, and even they seem a bit muddled about the matter. Their theories as to why the human brain is shrinking are all over the map.

One cognitive scientist quoted in the Discovery article suggests that this means humans are actually getting more stupid as time goes on. But such an idea is contradicted by evidence regarding the Flynn effect. Based on scores on standardized IQ tests, human intelligence seems to be increasing by about 1 percent per decade.

What can we infer from the fact that our genome's are much smaller than a lily's and that our brains are much smaller than a caveman's? One inference is that some modern biology dogmas are unfounded. One such dogma is the claim that DNA is some kind of blueprint for an organism. There has never been a sound basis for this idea, which has been advanced without proof by countless writers. DNA is properly thought of as a list of the chemical ingredients used by an organism.

The minimal poor-man's “language” used by DNA is a language capable of stating only a list of amino acids. There seems to be no way that DNA can possibly be stating either a three-dimensional specification of the body plan of an organism, nor any type of set of instructions for constructing a three-dimensional object.

Let's imagine I have a minimal, poor-man's language that has only 7 words in the language. The words are “bread-slice,” “ham-slice,” “cheese-slice,” “tomato-slice,” “turkey-slice,” “lettuce,” and “baloney-slice.” With this language I can specify endless varieties of sandwiches. But I cannot at all specify a blueprint for a house or a three-dimensional organism. The “language” used by DNA is like such a poor-man's “sandwich language.” The only difference is that instead of having 7 such words, the DNA language has only nouns that are the names of 20 amino acids.

Besides the fact that there is no way to state a complex 3D blueprint in DNA, there is the fact that even if such a thing were to exist in DNA, there would be no tiny component in the body capable of interpreting instructions so complicated.  Blueprints are only useful because there are human minds that can interpret them and bring the design plan to fruition. There is nothing like a 3D blueprint interpreter in a human cell capable of interpreting 3D assembly instructions if they existed in DNA.


The claim that DNA is some kind of blueprint giving the complete layout of an organism is a piece of simplistic nonsense, unsupported by fact. The C-value paradox and the G-value paradox contradict such a claim. If DNA was a blueprint for organisms, we would expect humans to have a genome 10 times bigger than the genome of a lily, but instead we find the opposite.

It is easy to understand why the myth of DNA as a blueprint became popular. After DNA was discovered there was a choice between two beliefs:

Belief 1: We've found one little piece in the puzzle, but it can't be anything close to the full answer. Finding the full answer may take centuries.
Belief 2: This is the answer that explains it all!

Belief 2 became popular because it was reassuring, and people love simple, triumphal stories, even when they don't make sense or are not consistent with the facts.

Just as the C-value paradox argues against the "DNA as blueprint" dogma, the claim by anthropologists that 20,000 years human brains were significantly bigger conflicts with the idea that the human mind is merely the product of the brain -- unless you want to believe that cave men were smarter than Plato.  Another fact conflicting with such a claim is the fact that crows (with a tiny brain) have been repeatedly observed in experiments to have very high mental functioning.