This week the CIA released 13 million pages of documents. The documents include some jaw-dropping accounts dealing with psychic phenomena.

You can search for documents using this URL. Seeing a news report saying that there was an interesting test report regarding the famous psychic Uri Geller, I typed in his name in the search box.  I got this document describing some 1973 tests done with the famous psychic. Near its beginning, the document states, “As a result of Geller's success in this experimental period, we consider that he has demonstrated his paranormal perceptual ability in a convincing and unambiguous manner.”

Geller was placed in a double-walled shielded room used for EEG research, one with an outer and inner door. Some drawings were made and one by one taped on the outer wall. Geller's successes were remarkable. In one example, the drawing taped on the wall was of 24 grapes. Geller drew a picture that also had 24 grapes.  Below are the test drawing and Geller's drawing.  You could hardly ask for a more exact match. 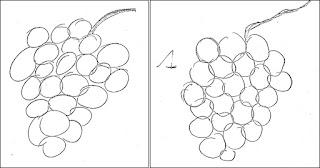 In another test on August 8th, the target picture was of a flying sea gull. Geller almost immediately said he saw a flying swan.

The CIA document also includes many documents on the STARGATE project, a long-running government project which for many years did experiments on remote viewing, a psychic ability to gain information about remote locations through paranormal means. An overview document is here.  Among the STARGATE documents is a 439-page document entitled, "Anomalous Mental Phenomena."  This document begins by saying, "The conferees agree to provide $2,000,000 for the STARGATE program as proposed by the Senate."  The ultimate proof of the fact that this long-running program did indeed get evidence of paranormal abilities is simply the fact that it was well-funded for many years. You don't get funding like that year after year unless you have some impressive results you can brag about in annual budget reviews. On page 159 to 184 of this document is a paper giving some good evidence for the reality of remote viewing.

Another interesting paper in the CIA documents can be found here. It discusses a Chinese practice called qigong, and claims that 20 million people were practicing it by the 1980's. (The Washington Post describes qigong as "a 5000-year old Eastern healing art.") The paper discusses some “qigong masters.” A man named Zhang Baosheng is described as having the ability to read sealed envelopes, remove small insects from sealed bottles, burn cloth with a touch of his fingers, and write a message on a paper sealed in a box. The paper asserts: “Countless tests were performed, all under tightly controlled conditions, and their results published without a single attempted fraud.”

There is mention of the same person figuring prominently in the previously mentioned report, Zhang Baosheng. The report says he could “perform incredible miracles.” We are told, “Zhang caused objects, such as someone's photo identification card or personal name stamp to move to another room which had not been entered, or caused a torn personal letter to be restored to a single piece.” The paper also claims that Zhang could remove from sealed bottles (in a paranormal manner) things such as insects or small pills.

The paper also says that another “qigong master” named Yan Xing was associated with many paranormal healings, and “performed various transformations of the physical characteristics of samples at a distance of several meters,” also doing the same thing at a distance of 2000 kilometers.

There were a number of experiments called “psychokinesis” experiments where the subject with paranormal abilities would turn the hand of watches, bend metal, break matches, pluck off twigs...as well as cause exposure of sealed unexposed film, and “spontaneous combustion” of some flammable materials with the wave of a hand, without touching the materials in the experiment. Successes in these experiments followed one after another.
The document notes there was a repressive backlash: “The research in many areas and in many units was forced to stop.”

You have to take the word of the Chinese about such dramatic mind-over-matter paranormal phenomena. But it's a different story in regard to extrasensory perception (ESP), which has been extensively studied in the Western world for more than 100 years, with very convincing results being repeatedly achieved under controlled laboratory conditions (as discussed here and here). You would not know about this from the statements of many Western scientists who are in denial about such a phenomenon, and who have erected within their little cultural tribes a senseless social taboo against acknowledging the existence of ESP, mainly because it conflicts with their incorrect underlying assumptions about the relation of the brain and the Mind.

One point frequently made against ESP is "we don't understand how it would work." The person who makes such a point is typically throwing a stone from a glass house, as he typically believes in lots of things (such as the Big Bang, the origin of life from chemicals, the 50-year storage of memories in brains, the instantaneous recall of memories in brains, and the very phenomenon of consciousness) which he cannot explain with any description involving plausible details of the underlying causes and mechanics.  For ages people observed earthquakes and infectious diseases without any understanding of their causes (plate tectonics and microorganisms); and it would have been rather silly if people had pretended during such ages that such things didn't exist.

Postscript: Another interesting document in the CIA document dump is this one.  The document discusses Kirlian's photography of a person named A. Krivoroltov, who was supposedly able to heal by the technique of "laying on hands."  We are told, "A hundred fold repeated rumor is that somehow the Krasnodar experimentalists have been able to photograph a mysterious luminescence (maybe even a sign of holiness, a halo) that a person is suppose to emit." Kirlian measured the electrical resistance on Krivoroltov's hands, and found them to be 3 to 5 times the normal amount.
Posted by Mark Mahin at 11:11 AM