An example is the family of speculations known as cosmic inflation theory, which speculates about a sudden surge in the expansion rate of the universe at a time about a trillionth of a trillionth of a trillionth of a second after the universe's beginning (a surge which then suddenly ended after a fraction of a second). The facts we have about the universe do not directly support such an idea, but merely the much simpler idea that the farther you go back in time, the hotter and more dense the universe was (which leads you back to a point, apparently, of infinite density at the very beginning of cosmic history). Another example of a speculative cosmological theory is Paul Steinhardt's ekpyrotic theory, an attempt to replace the speculative cosmic inflation theory with an arguably even more speculative theory involving unobserved cosmic cycles. Another speculative cosmological theory is the theory of cosmological natural selection, which also involves many cosmic cycles. Then there is the “string landscape theory” involving a multiverse of more than 1,000,000,000,000,000,000 universes.

In his scientific paper our theoretical cosmologist will never refer to his speculative ideas as speculations. Instead he will typically describe his theory as a “model.” But it is often misleading to use such a term when referring to cosmological speculations. In science a model is an attempt to represent known reality by presenting a simplified description that accounts for certain features of that reality, or represents that known reality in a mathematical way.

A very simple example of a model is the Bohr model of the atom, which represented the electrons in an atom as being like planets rotating around the sun, with the nucleus of the atom being like the sun. This model was later found to be too simple, but at least it shows the idea of a model: a mental representation we can use to help us understand a much more complicated reality. 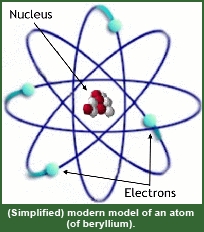 Bohr model of the atom

Another example of a model is the “solid particle” model of subatomic particles. This simply involves depicting things such as electrons as hard, solid particles. This is a simplification, because it turns out electrons can act like either waves or particles, and the position of an electron should more realistically be represented as a kind of “smeared out” probability cloud. Another example of a model is the plate tectonics model. The physical surface of our planet involves countless details, but we can more simply describe it as being a set of about 12 big plates that generate earthquakes when they collide with each other.

Why is it inappropriate to use the term “model” to refer to speculative cosmological theories such as the cosmic inflation theory, the ekpyrotic theory, the theory of eternal inflation, and the theory of cosmological natural selection? It's because such theories are not simplifications, but are typically the opposite of simplifications. Speculative cosmological theories involve assuming the existence of events or physical realities that have not been observed. Such theories don't involve a mental representation in which things are simpler (as we have with models), but instead involve depictions of nature in which things are more complicated. Theories of such a type are not rightfully called models (although some of them are so ornate that we might rightfully call them extravaganzas).

Another way in which speculative cosmologists hide their speculations and guesswork is to avoid candid phrases such as “we guess” and “we speculate,” replacing them with phrases such as “let us start with,” “we assume,” “we take,” “we model” and “we describe.”

Here is an example from this scientific paper. The authors begin by saying, “Let us start with a model of slow roll-inflation,” and then describe a very specific version of this theory. They've immediately journeyed far into the airy dreamland of cosmological speculation, since “slow-roll inflation” is a highly speculative theory to begin with. The authors then say “we model this by adding a field,” and then describe a further highly speculative complication needed so that some thing “is anchored at the bottom of the inflationary valley.” Mentioning two fields, both of which are speculative, the authors say “we also assume that the fields ...interact via a higher-order operator,” adding another layer of complication to the speculative spider web they are spinning. They later say “we take the representative central value” to have a numerical value of 55, making an arbitrary guess. They then say, “We assume that inflation ends abruptly after the critical point,” making yet another speculative assumption. They mention “we can adjust the inflationary scale” in some particular way, and apparently do that also – still another piece of speculative guesswork.

Do you get the picture on what is going on here? Speculations heaped upon speculations. Wild guesses piled upon wild guesses. Picking numerical values out of a hat. But the reader might not be aware of that, because the authors don't use candid language to describe their guesswork.

If a paper such as this were to be written candidly, it might be written something like this: