On the distant planet Noolon there was a civilization which had only recently developed atomic power and space travel. The civilization was making excellent technical progress, and the inhabitants of Noolon were becoming more and more prosperous. The nations of the planet had united to form a single world government. But one day scientists discovered a horrifying truth. A giant asteroid was heading for the planet. Scientists projected that in a short time the giant space rock would hit the planet, killing everyone.

The world president Oros Kuelos announced the startling fact, and also announced a plan for dealing with the threat.

“The rumors you have heard are true,” said Oros on television. “The giant asteroid is heading for our planet, and if we do nothing, we will all die. But I have developed a plan that will save all of us.”

“We will organize a giant world-wide 'prayathon' to beg the gods for their mercy against this threat,” said Oros. “We will also sacrifice 100 million large animals to appease the angry gods. Together these actions will cause the gods to divert the asteroid, so that it does not hit our planet.”

The servile world-wide press was almost unanimous in praising the president's plan. But a young man named Datus was very skeptical.

“Maybe there's some way we can save ourselves,” said Mora. “Let's think of every possibility.”

The couple telephoned all their friends, asking for ideas. They eventually got a promising tip. There were rumors that a spacecraft was secretly being prepared at a remote location. Datus and Mora got in their vehicle and drove to near the rumored site.

They came to a road leading into the secret base, but were blocked by a locked gate guarded by a man with a weapon. The man refused them entrance.

Mora pointed to an alternate way of getting into the base. The base was surrounded by a high fence, but there was a gap in the fence near the back, at a spot where a high cliff served as a natural barrier to entry.

“Let's wait until darkness,” said Mora. “Then we'll climb that cliff, and try to sneak into the base.”

The climb was very dangerous, but the plan worked. In the morning, the couple found themselves inside the base. They could see a huge rocket was being prepared there.

The couple was soon arrested by a security guard, who brought them into the base's headquarters.

“Please, let us go in the rocket,” pleaded Datus. “We're doomed if we're still here when that asteroid hits.”

“We are preparing a rocket that will take a small group of astronauts on a risky trip to the fourth planet in our solar system, to build a colony there,” explained an official at the base. “We regard this as the last chance of our race. But the payload of the rocket is limited. We can't add new new astronauts.”

Mora started weeping. The couple asked if they could at least stay and help the effort, and the base official agreed.

The giant asteroid came closer and closer to the planet. The day before the scheduled rocket launch, the base official called in Mora and Datus to his office.

“Something unexpected has happened,” said the official. “It turns out that one of our older astronauts has cancer, so we've excluded him from the space mission. Another of our older astronauts died of a heart attack, perhaps from all the stress and fear. I guess that asteroid is already starting to take its toll. So we have two empty seats in our rocket. You interested?”

Mora started laughing, but Datus was still worried. Perhaps the hastily prepared rocket was unreliable. Perhaps it would explode in flames at liftoff. But after a moment's indecision, both he and Mora agreed to go on the rocket.

The next day the rocket blasted off. It shook violently on liftoff, and the young lovers were almost convinced that they would die right then and there. But somehow the rocket made it into space.

The rocket went into orbit around the planet. On the same day the giant asteroid struck the planet. Mora and Datus watched the collision sadly from a window of the spacecraft. 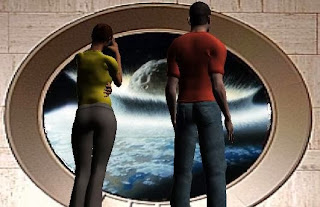 “That's all for the third planet,” said the captain of the spacecraft. “Now let's get going to the fourth planet. We know there's life and water there, so at least we have a chance.”

Mora and Datus held each other's hands, marveling at their unlikely escape.

“They say that when you fall in love, it's a whole new world,” said Datus, tenderly kissing Mora. “And that's what it's going to be for us literally – a whole new world.”
Posted by Mark Mahin at 11:34 AM