Judging from materialistic assumptions about the brain and the human mind (the idea that our minds are purely the product of our brains), we would expect there to be a high correlation between brain health and mental function. We would expect from such assumptions that there should be as high a correlation between brain health and mental function as there is between leg muscles and running speed.

But surprisingly such a high correlation does not seem to exist. The correlation between brain health and mental function seems to be merely a low correlation. I will now present some facts to support this claim.

First let's look at some results concerning strokes. The study here tested emotional intelligence in 32 patients who had strokes in the frontal lobes, claimed to be the crucial brain parts relating to intelligence. The study found that such persons had an average emotional intelligence of 87 – significantly less than the average of 100, but not a very big difference. This article in US News and World Report says, "It’s important to recognize that strokes do not cause a drop in overall intelligence.” This paper refers to “the generally minor effect of stroke on IQ” in children.

The recently published scientific paper here is entitled “A Lesion-Proof Brain? Multidimensional Sensorimotor, Cognitive, and Socio-Affective Preservation Despite Extensive Damage in a Stroke Patient.” Here is an astonishing report from the paper's abstract, describing a patient who seems mentally undamaged despite massive brain injury:

At age 43, patient CG sustained a cerebral hemorrhage and a few months later, she suffered a second (ischemic) stroke. As a result, she exhibited extensive damage of the right hemisphere (including frontal, temporal, parietal, and occipital regions), left Sylvian and striatal areas, bilateral portions of the insula and the amygdala, and the splenium. However, against all probability, she was unimpaired across a host of cognitive domains, including executive functions, attention, memory, language, sensory perception (e.g., taste recognition and intensity discrimination), emotional processing (e.g., experiencing of positive and negative emotions), and social cognition skills (prosody recognition, theory of mind, facial emotion recognition, and emotional evaluation).

Below is the paper's startling discussion of the very well-preserved memory in this patient who had suffered heavy brain damage from two strokes:

Even more striking are her mnemonic skills: her procedural and semantic knowledge is fully preserved, as shown in her smooth execution of various action routines (e.g., handling her cell phone, tying her shoe laces) and her intact naming and classification skills (e.g., she could flawlessly denominate all the objects she had thematically organized in different sections of her purse); furthermore, her declarative memory is extremely detailed for events which happened weeks, months, and even years ago. She could describe scenes from her childhood and adolescence, she meticulously narrated episodes occurring immediately before and after her strokes, she remembered the names, specialties, and suggestions of all her doctors, and she could recount details of dozens of books she had read throughout her life.

We know that Alzheimer’s disease can cause an inability to recall memories, although whether the memories are actually lost is debatable. What is remarkable is the fact that a large fraction of the brain can be ruined by Alzheimer’s disease before a patient can become noticeably poor at remembering things. Here is a quote from an expert on the disease:

One of the big challenges we face with Alzheimer's is that brain cell destruction begins years or even decades before symptoms emerge. A person whose disease process starts at age 50 might have memory loss at 75, but by the time we see the signs, the patient has lost 40 to 50 percent of their brain cells.


The same very astonishing thing is said in this article, which quotes an expert saying the following:

In Alzheimer’s, brain cells start to die 10, 15, or 20 years before symptoms appear. By the time we observe memory lapses, 40 percent to 50 percent of brain cells are gone, and it’s too late to make a difference.

These statements are astonishing. If our memories are all stored in our brains, why would you have to lose 40 to 50 percent of your brain cells before people started noticing your memory loss? Again, this suggests merely a low correlation between brain health and mental function. 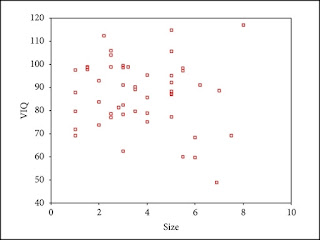 When we consider sudden traumatic injury to the brain, we also find some cases where the correlation between brain health and mental function seems to be merely a low correlation. One astonishing case is that of Gabby Giffords, a US congress representative who was shot at point-blank range in the back of the head. Not only did she live, but (as discussed here) she has recovered to a remarkable degree, to the point of being able to bike, and speak clearly (although in shorter sentences). A similar case was the famous case of Phineas Gage, a nineteenth century railroad worker who had a thick iron railroad spike accidentally drive through his skull, piercing his frontal lobes. A physician soon reported after examining Gage that he was “quite recovered in his faculties of body and mind.” Gage seems to have had some personality changes later, but such changes are trivial compared to what we would have expected from such an injury under materialistic assumptions about the brain.

No discussion of the low correlation between brain health and mental function would be complete without a mention of the work of physician John Lorber. As discussed here, Lorber studied people whose brains had been severely damaged by conditions such as hydroencephaly, in which healthy brain tissue is replaced by a watery fluid. Lorber divided patients into four categories. The last and most severe was a category was one in which “ventricle expansion” due to disease fills 95 percent of the cranium. Remarkably, Lorber found that in this last extreme category, half of the patients had IQ's greater than 100. Lorber also marveled at a patient whose IQ was high despite extremely severe brain damage due to disease:

There's a young student at this university, who has an IQ of 126, and has gained a first-class honors degree in mathematics, and is socially completely normal. And yet the boy has virtually no brain.

Then there was the case that the Reuters new agency reported with the headline, "Tiny brain no obstacle to French civil servant." It told the case of a well-functioning civil servant who had merely a "thin sheet of actual brain tissue."  Reuters was reporting on a case described in the medical journal Lancet.

Then we have the case of savants, people like the late Kim Peek who could remember 98 percent of what he had read in more than 7000 books. Savants sometimes have a strange combination of brain damage and memories better than those of ordinary people.

These cases all tell us the same thing: that there is merely a low correlation between brain health and mental function, and that people can often have very high mental function even when their brains are greatly damaged. As a scientific paper says, “There does not appear to be a direct relationship between the degree of brain pathology or brain damage and the clinical manifestation of that damage.”

Such cases are not at all compatible with the conventional thinking of neuroscientists that the human mind is merely the product of the brain. But such cases are compatible with the assumption that the human mind is mainly the product of some mysterious reality beyond our understanding: a soul or some cosmic consciousness infrastructure much greater than a human body.

There are three big reasons for thinking that our minds and memories are not merely products of our brains. The first reason is cases like the ones discussed in this post. The second is the inability of neuroscience to plausibly account for the mental function we observe in humans. Scientists cannot plausibly account for the storage of human memories lasting for 50 years. The leading theory to explain this holds that such memories are stored in synapses, but that theory is untenable because synapses are subject to rapid molecular and structural turnover which should make them incapable of storing memories for longer than a year.  Nor can scientists explain such simple things as how brains can retrieve memories instantaneously like humans do (which creates all kinds of "how did you know where in your brain that memory was stored" issues).  Nor can scientists explain how neurons could possibly do something such as forming an abstract thought (not just the perception of a single bird, but the generic abstract idea of a bird).

The third reason for thinking that our minds and memories are not merely the products of our brains is the fact that there are many well-established cases of psychic phenomena (such as ESP and near-death experiences), which we cannot explain under "your mind is merely the product of your brain" assumptions.

The visual below illustrates the type of reasoning used by some people to try to establish conventional assumptions about the brain, and why such reasoning is not convincing. 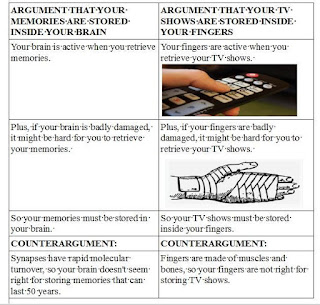