It's surprising because of what is called the winding problem. Galaxies rotate, and a galaxy like ours takes about 200 million years to rotate. But consider a rotating spiral galaxy. The stars closer to the center of the galaxy will take a much shorter time to rotate around the center of the galaxy than the stars closer to the edge of the galaxy (just as planets close to the sun have much shorter years than planets far away from the sun). That's because the circles of rotation of stars closer to the galaxy's center have a much smaller radius. Therefore, based purely on rotation speeds, we should expect that the spiral arms of a spiral galaxy should “wind up” after only 2 or 3 rotations, and that spiral arms should last less than a billion years.

But the age of the universe is about 13 billion years, and spiral galaxies are believed to be about that age, or almost as old. This means the average spiral galaxy has undergone more than 50 rotations. Based on simple rotation considerations, it seems that we should not at all be seeing even a tenth of the spiral galaxies that we see in the sky.

But don't worry, scientists have an explanation to cover this: what is called the density wave theory. But it's not a particularly credible explanation. It doesn't seem to stand up very well to observations, and it isn't well-confirmed by computer simulations.

But anyone familiar with the distance between stars should be suspicious with this analogy. Cars on a freeway exit are relatively close to another. But stars are not relatively close to each other. The distance to the nearest star is 6 million times the diameter of our sun. So how can any type of freeway exit car concentration analogy be appropriate for stars so far apart?

The “density wave” imagined by the density wave theory is merely an area where stars are about 10% more common. But given the immense relative distance between stars, how can anything that far apart act like a wave?

A recent scientific paper studied the spiral galaxy M81. The paper concluded, “Our data therefore provide no convincing evidence for a stationary density wave with a single pattern speed in M81, and instead favor the scenario of kinematic spiral patterns that are likely driven by tidal interactions with the companion galaxies M82 and NGC 3077.” The “tidal interactions” theory is a completely different one from the density wave theory, and one with its own plausibility problems (tidal interactions are random gravity tugs that we should not expect to produce all that often the orderliness of spiral arms). 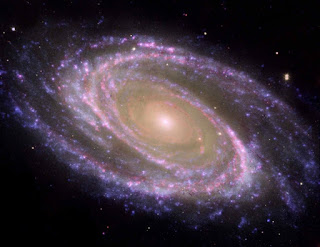 In a paper that calls itself  “A case against spiral density wave theory,” some scientists stated the following:

An offset is expected between these subsamples as a function of radius if the pattern speed of the spiral arm were constant - as predicted by classic density wave theory. No significant offsets are found....The standard scenario of density wave theory with a constant pattern speed results in an offset with respect to age for the distribution of distances to the spiral arms as one moves from the central regions... No significant differences are found in the distribution of these sources, giving further negative evidence for density wave spirals.

If scientists actually understand what forms spiral galaxies, they should be able to create computer simulations that show spiral galaxies very often forming from random collections of matter, with the spiral galaxies persisting in sufficient numbers. But the simulations don't do that. A recent major galaxy evolution simulation was the Eagle project, described in this paper written by more than a dozen scientists. But the 38-page paper doesn't mention density waves, doesn't mention spiral arms, and doesn't even use the word “spiral.”

When asked about the spiral arms in spiral galaxies, scientists will often speak as if they understand their origin and persistence, without confessing their lack of understanding on this matter. But occasionally you will get some refreshing candor on this topic. The abstract of this 2012 paper candidly says, “After almost fifty years the origin of spiral arms in disk galaxies remains one of the major unsolved problems in astrophysics.”

Here we have another case of scientists trying to explain a mountainous effect (that a large fraction of the universe's galaxies are magnificent spirals) by using a little molehill of an explanation (that it's just "traffic jams" that cause this). I suspect something vastly deeper is going on.

Postscript: The recent discovery of "super spirals" ten times bigger than our galaxy makes it all the much harder to explain spiral galaxies, as discussed here.
Posted by Mark Mahin at 1:41 PM