If Mankind Were To Perish, What Would Be Its Epitaph?

An epitaph is a short statement (often only a single sentence) honoring someone who has died, or summarizing his life. An epitaph is often written on a tombstone. Some classic epitaphs include the following:

Here lies Lester Moore,
Four slugs from a 44
No Les, no More

Here lies the body
of Jonathan Blake
Stepped on the gas
Instead of the brake.


The death of an individual is sad to contemplate, but there is a possibility vastly sadder to ponder: the possibility of the entire human race becoming extinct. If that were to happen, perhaps someone or something might erect a memorial for the extinct human race. In such a gloomy case, what epitaph might be written for the human species?

The following would work pretty well as an all-purpose epitaph for the human species, no matter how we might become extinct: 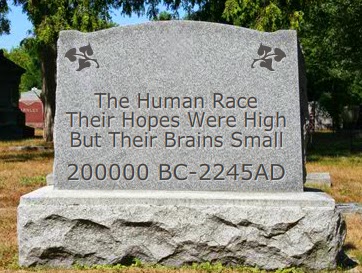 But what about specific extinction scenarios? One possibility is that we might invent super-intelligent machines which learn how to make copies of themselves. The number of super-intelligent robots might grow larger and larger, and the number of humans might grow smaller. The new super-brainy robots might take over entirely. The new robotic species might keep us humans around for a while, but they might eventually decide: the only intelligent beings that should exist on this planet are super-intelligent beings. Then they might get rid of us fleshy humans entirely. In such a case they might erect a memorial for the vanished human race, and it might look like this: 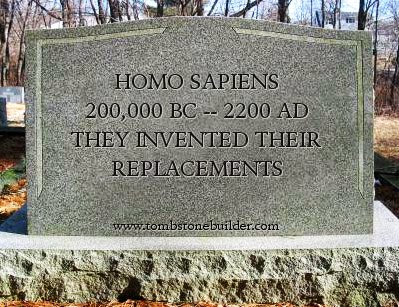 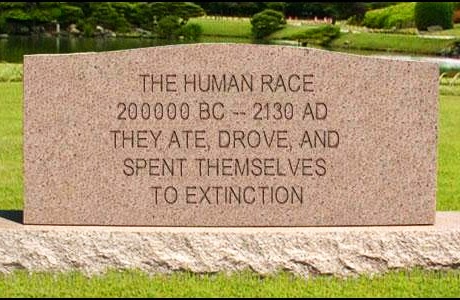 Another possibility is that the mankind may destroy itself in a war. There need not be any fancy technological breakthroughs for this to be a possibility, because the USA and Russia still have many thousands of nuclear weapons. One day they might be used, in a deliberate attack, or a war that escalates from a small-scale use of nuclear weapons due to an accidental launch or a limited launch by a madman. Or the human race might perish in some new type of war, such as a biological war using genetically engineered germs. In such a case, the following might be used as an epitaph for our species: 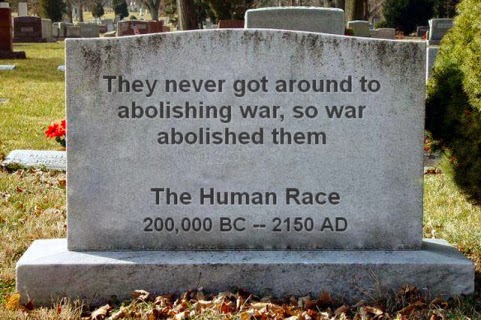 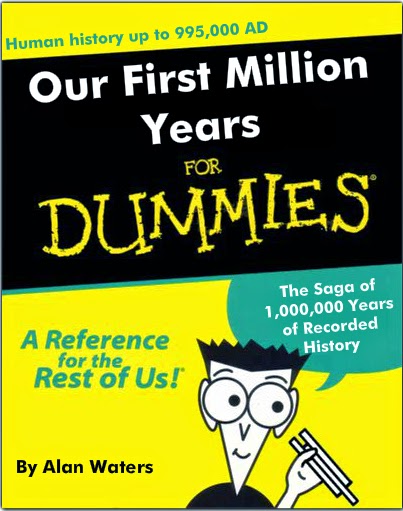 Email ThisBlogThis!Share to TwitterShare to FacebookShare to Pinterest
Labels: end of the world, future of man, human extinction