Wormhole War: A Science Fiction Story In the year 2120 Dr. Carlson thought the door to the stars had been opened.

Carlson worked for the Corporate Confederation, the government which came into power after the dissolution of the United States of America. After years of research, Carlson and his large research team had created a device capable of creating space-time wormholes.

Scientists had long imagined that a wormhole might exist, a kind of tunnel through space-time allowing instantaneous travel from one point in space to another. Einstein's theory of special relativity said that nothing can travel faster than the speed of light, but a wormhole was a way to sidestep that limitation. If one could travel through a wormhole, one could instantaneously travel from one star to another, which would allow rapid interstellar travel.

After announcing the discovery to his superiors, Dr. Carlson asked when the government would start funding an interstellar expedition that made use of the wormholes his device could create.

It turned out the funding for the research program had come from the military budget. The Corporate Confederation in North America had been at war for five years with the Pan-Asian League, a huge nation consisting of most of the world's Asians. But the war had become a stalemate. There was no chance of it becoming a nuclear war, because nuclear weapons had long ago been abolished. The Corporate Confederation was looking for some new weapon to end the war, and it was believed that the wormhole device would provide a new way to smite the enemy.

A Committee for Wormhole Warfare was created to make use of the wormhole technology. The committee was chaired by General Peter Davidson. Davidson's committee decided to create a wormhole that would consist of a space-time tunnel between the upper atmosphere of Venus and the Asian city of Quongching.

The wormhole was created by Carlson's device, and suddenly a city of millions of people found itself bathed in a deadly toxic rain – a rain of sulfuric acid. The sulfuric acid came from the upper atmosphere of Venus, and poured through the wormhole, falling onto the streets of the city. All who the rain fell upon found themselves hideously disfigured.

“That should bring them to their knees pretty soon,” said General Davidson.

But a few days later there was a horrible twist of events which came as a complete surprise. Suddenly the island of Manhattan in New York City was buried twenty feet deep in dust, ice, and small rocks.

“How the hell did this happen?” asked General Davidson.

“We think the enemy has developed its own wormhole weapon similar to the one we have,” said Major Williams. “They seem to have created a wormhole that establishes a space-time tunnel between the rings of Saturn and New York City. As Saturn rotates, the dusty, icy material from its rings is pouring into the wormhole, and it ends up getting dumped on New York City.”

“We must retaliate, and hit them twice as hard as they hit us,” said General Davidson. “What can we do?”

“I have an idea,” said Major Williams. “We can create a wormhole that creates a space-time tunnel between a spot in the atmosphere of Jupiter and one of their cities. The atmosphere of Jupiter mainly consists of hydrogen, which is an explosive gas. If we create this wormhole, and let a huge amount of hydrogen pour into the area above one of their cities, it will lead to a gigantic explosion.”

“I like it,” said General Davidson. “It sounds like it will be almost as powerful as a nuke.”

The wormhole was created between the atmosphere of Jupiter and the Asian city of Shongzhou. The hydrogen filled the air above Shongzhou. Then when someone in the city flicked a lighter to light a cigarette, there was an explosion that flattened half of the city.

“That will teach them not to mess with us,” said General Davidson. “I'd like to see them top that.”

But a few days later, the warriors of the Pan-Asian League were able to avenge the attack against Shongzhou. The attack came against Chicago.

Suddenly without warning, the sky above Chicago began to fill with flame. It was a flame like no one had ever seen before – pulsing, swirling, almost liquid. Pouring forth in ever greater amounts, the flame consumed the entire city. By the end of the day, almost every building was on fire. 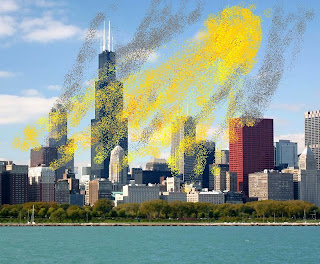 General Davidson's committee met to discuss what had happened.

“Fire from the sky – how the hell did the enemy manage to do that?” asked Davidson.

“I think I know what they did,” said Major Williams. “They created a wormhole that established a space-time tunnel between the surface of the sun and the atmosphere above Chicago. That fiery stuff that came from the sky was the super-heated gas that is called plasma. Because of the wormhole they created, Chicago was set on fire by solar plasma.”

General Davidson demanded that his committee create a plan for an even more deadly retaliation, one that would involve creating wormholes that would incinerate several Asian cities with solar plasma. The plan was put into effect with devastating consequences.

One day General Davidson was chairing a meeting at his office, which was located at the building that was once known as the Pentagon. Davidson was about to review the plan for delivering the finishing blow to the Pan-Asian League. Then Davidson looked out the window, and saw something he couldn't believe.

“It's a vast horde of enemy troops, right outside our window,” said Davidson. “How did they get here? They couldn't have landed by sea. Our navy would have stopped them.”

“This can only mean one thing,” said Major Williams. “They must have created a wormhole that allows them to move troops and tanks instantly from Asia to Washington D.C.”

Gnashing his teeth, General Davidson gave a final order to his troops.

“All right boys, looks like they've won this round,” said Davidson. “Peel off your shirts, take off your undershirts, and attach them together to make a big white flag.”