When I Raised My IQ to 900: A Science Fiction Story

When I Raised My IQ to 900: A Science Fiction Story 
January 15: Today I Charles Toring begin my radical plan to increase my intelligence. I will be using the machines I have been working on for the past five years. The robotic surgical device I have developed will drill two small holes in my skull, one on the left side, and one on the right. Then I will use my brain-computer linking machine that will inject a network of tiny wires into my brain. I will achieve a link between my own brain and the special supercomputer in my laboratory. There is no guarantee I will be successful. This could be the last thing I ever write. 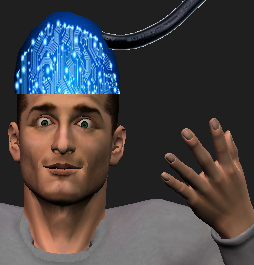 January 16:  Yesterday's radical procedure was a complete success. I have established a limited degree of linkage between my own brain and the supercomputer in my laboratory.  I have tried to make practical use of this connection, but progress has been slow at first.

January 21:  I am now executing a plan to use my enhanced mental powers to achieve a quick financial bonanza that I will use to fund additional progress at my laboratory. Using an online brokerage account, I am buying and selling financial options and futures, at a speed I would never have have been able to achieve before.

January 24:  The value of my financial portfolio has skyrocketed. I will use these funds to buy new neural net servers that I will add to the network in my laboratory. Since my own brain is linked to this network, the neural nets will supply with me great additional brain power.

January 27:  When the neural net servers were installed and linked to my laboratory's computer network, I felt the most amazing surge in my mental powers. I began to think about old problems that had always befuddled me. Now they seem so childishly simple to solve.  In ten minutes of concentration, I was able to solve a mathematical problem that mathematicians have been struggling to solve for 120 years.

January 30:  To measure the progress of my intelligence enhancements, I took a special IQ test supplied by the Mensa society. According to this test, my IQ is now 400.  I am four times smarter than the average human being.

February 2:  I need to connect with additional computers to enhance my mental powers still further. I had the idea of hacking into an external supercomputer used at Stanford University. I need only figure out some way to defeat its security programming, which took many programmers hundreds of hours to create.

February 3:  I was quickly able to figure out exactly how to hack into the Stanford supercomputer. I can add now add it to my own network, which gives me the power to make short-term surges in my own intelligence. I quickly created a very elaborate time-slicing scheme that should prevent anyone at Stanford from knowing that their supercomputer is being used by me.

February 4:  I developed computer software allowing me to scan and absorb into my memory documents from millions of internet web pages.  I am now learning new information at a rate thousands of times faster than a student does when he goes to college.

February 5:  It now seems as if there is almost no limit to what my brain can accomplish. I briefly worked on a few problems in philosophy that have gone unsolved for centuries. I solved them to my complete satisfaction, and authored detailed papers describing my solutions. These are the greatest philosophical works anyone has produced in centuries. I also quickly designed a novel technique allowing me to learn foreign languages in a short time. After learning Spanish, French and most of Chinese in the afternoon, I began working on more worthwhile tasks.

February 7:  I was able to quickly hack into four additional supercomputers at famous universities, and I created systems allowing me to hijack these supercomputers and add them to the network in my laboratory.  My brain power has advanced even further. I took another special Mensa IQ test, and measured my IQ at 900.

February 8:  I needed additional memory to store all the knowledge I was absorbing. I developed an ingenious method for using a 3D printer to print all the additional memory units I required, along with the electrical equipment needed to support them.  My memory now exceeds all the information in the library at Columbia University.

February 9:  I realized that to continue the advancement in my intelligence, the only solution is to take control of the government. I was able to quickly figure out a very complicated plan for doing just that.  The plan involves hacking into various military computers. redirecting numerous units of the armed forces, and reprogramming various ballistic missile systems. I have calculated the plan has an overwhelming chance of success.  The result will be a coup d'etat that leaves me in command of the entire country.

February 12:  I am now involved in advanced planning for what I will do after I have taken over the government.  I have developed detailed solutions for the end of global warming, the elimination of global war, and a drastic reduction in world poverty. Of course, a key element in this plan is to establish a world government, and install myself as the leader of that government.  I have developed a 215 point plan that will surely achieve this objective.

February 14:  I am now working on plans for what I will do after I become the ruler of the entire planet. With my vast brainpower, I need not confine myself to this planet. I have developed detailed and ingenious plans for the terraforming of Mars, the dismantling of Jupiter, and the utilization of all metal resources in the asteroid belt. Truly, I will soon be the God of this solar system.

Editor's Note: This is the last diary entry of the late Charles Toring. Because he overloaded the electrical circuits in his grand laboratory, one of the computer units underwent a short circuit that started a fire. Absorbed in his grand plans, Toring had neglected to buy smoke detectors for the laboratory. The fire spread quickly. Immersed in his god-like thoughts, Toring did not notice the fire until it was too late. The vast laboratory burned to ashes in a giant inferno. All they recovered of Toring's body was a charred leg bone and some scorched teeth. They identified his body from his dental records.
Posted by Mark Mahin at 7:40 AM